LEDA AND THE SWAN

A sudden blow: the great wings beating still
Above the staggering girl, her thighs caressed
By the dark webs, her nape caught in his bill,
He holds her helpless breast upon his breast.

How can those terrified vague fingers push
The feathered glory from her loosening thighs ?
And how can body, laid in that white rush
But feel the strange heart beating where it lies ?

A sudden shudder in the loins engenders there
The broken wall, the burning roof and tower
And Agamemnon dead. 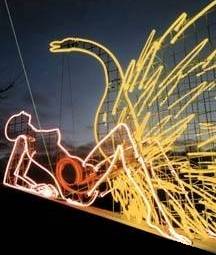 Being so caught up,
So mastered by the brute blood of the air,
Did she put on his knowledge with his power
Before the indifferent beak could let her drop ?

Leda was also known as Nemesis, whose animal-other was a swan.
Zeus the Olympic Rapist thus set in train the Trojan War -
for Leda in due course produced one egg which contained two boys (Castor and Polydeuces)
and one girl: Helen, whom Paris abducted to Troy.

According to another myth, Leda produced another egg which contained Clytæmnestra,
who became the wife of Agamemnon, victor of the Trojan War,
sacrificer of his daughter Iphigeneia to Artemis in return for a fair wind to Troy,
for which act Clytæmnestra murdered him in his bath.
Her other two children, Elektra and Orestes then, with some ado, avenged their father:
the subject of Euripides' Oresteian Trilogy.

The poem suggests that any rape, or any coupling might lead to genocide -
whether Trojan, Native American, Armenian or Roma - or "population exchange" and "ethnic cleansing".
Any union, however willing and loving, might produce Hitler or Stalin,
or lesser unsought war criminals such as Henry Kissinger or Dick Cheney
(to say nothing of subsidized and adulated arms manufacturers).

The last lines of the poem bizarrely wonder if Leda/Nemesis had any visionary glimpse of the result of the rape before his post-ejaculatory rejection.

THE SECOND COMING by W.B. Yeats >

awaiting the barbarians by Konstantin Kavafy >